Dogue Books to Look For

A Brief History of the Dogue de Bordeaux

In France, the Dogues were bred depending on the region and jobs they were required to do.  The general appearance was inconsistent, the Dogue had various colors and varieties of coat, they had scissors bites in some regions, undershot in others, but they all had a general type similar to today's Dogues.

We do know the Dogue de Bordeaux was used as a guardian, a hunter, and a fighter.  They were trained to bait bulls, bears, and jaguars; hunt boars; heard cattle; and protect the homes, butchershops and vineyards of their masters. The Dogue de Bordeaux were prized as protectors and were often found in the home of the noble and wealthy of France.

During the French Revolution, many of the Dogues are thought to have perished with their wealthy masters during the uprising of the classes, but the Dogues of the common man must have thrived. These Dogues became the champions of the arena, and were powerful dogs bred to do their jobs and do them well.

It was in 1863 when the first reference of the Dogue can be found, at the first canine exhibition at the Jardin d'Acclimatation in Paris, France.  It was more of an inventory of breeds than a conformation event.  The winner was a bitch named Magentas, and the Dogue de Bordeaux was given the name of the capital of their region of origin.

There is not another known reference to the Dogue until the year 1883.  There was such diversity in the breed at this time, and much controversy over this. They had big heads and small heads, some were exceptionally large in body, while others very small. Some breeders preferred the scissors bite, others the undershot. The mask color was the subject of many debates and discussions. There were three styles of Dogue at this time, the Toulouse, the Paris, and the Bordeaux.  Our modern Dogue is a mixture of these different types, but is primarily Bordeaux.

The Toulouse was a Dogue that had almost every color in its coat, a fawnish tiger (a light brindle perhaps), with a longer body and smaller bones.  Dogues in Paris had a scissors bite, while others had a undershot of almost one inch.  Finally the breeders came together and decided upon the undershot, which is today's standard.

During World War II the breed was almost wiped out.  It was only saved by a small group of dedicated breeders working with a very small number of Dogues.

During the 1960's, Dr. Raymond Triquet headed the rebuilding of the breed, and in 1970, Dr. Triquet wrote the new standard for the Dogue de Bordeaux.  The standard has once again been updated, this time by Dr. Triquet and Mr. Tim Taylor.

It was a Dr. Philip Todd who is credited with bringing the Dogue to the United States in the 1960's, although evidence of Dogues in the 1920's has been found.

Dr. Todd moved to Holland with his Dogues, and there were no other records of any in the US until 1969 when Steve and Wendy Norris (Norris Creek Kennel), with the help of Dr. Todd, began to import Dogue de Bordeaux into the United States.

It was in the 1980's when the United States saw a small Dogue boom occur.  In 1986 Touchstone released Turner and Hooch, showing a big messy slobbering Dogue, which was believed to be a Bullmastiff or mutt.  In reality, it was the Dogue de Bordeaux.

One must be careful when purchasing a Dogue de Bordeaux, although they are considered a rare breed, they carry a hefty price tag and are a favorite breed among the puppy farmers.  Many are stolen from their homes… 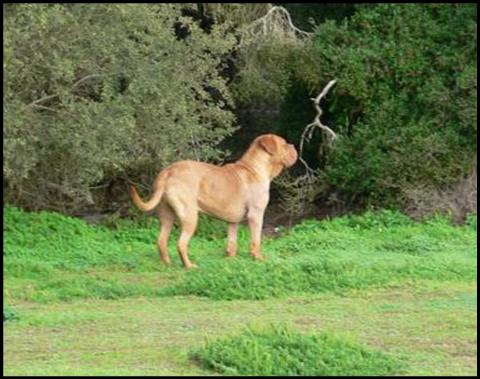