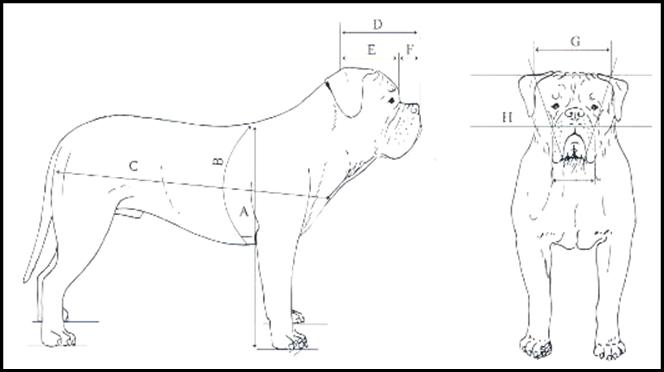 _
The above diagram is an exert from the magnificent book ‘The Saga of the Dogue de Bordeaux’
by Raymond Triquet (father of the breed) and published by Bas Bosch Press.  It is recommended that every breed enthusiast try to obtain a copy of this book as it’s content and full Breed Standard Commentary will be of great benefit to anyone wishing to improve their own Dogue de Bordeaux dogs and in particular their knowledge and education in the breed.
_Feature           Important Proportions/Standards

_GENERAL APPEARANCE - Typical concave lined brachycephalic mollossoid [short-headed Mastiff type].  The Dogue de Bordeaux is a very powerful dog, with a very muscular body yet retaining a harmonious general outline.  He is built rather close to the ground, the distance sternum to ground being slightly less than the depth of the chest.   Stocky, athletic, imposing, he has a very dissuasive aspect.
Important Proportions:
The length of the body, measured from the point of the shoulder to the point of the buttock, is superior to [greater than] the height at the withers, in the proportion of 11:10.
The depth of the chest is more than half the height at the withers.
The maximum length of the muzzle is equal to one third of the length of the head.
In the male, the perimeter [circumference] of the skull corresponds, more or less, to the height at the withers.

CHARACTERISTICS- [See also under General Appearance and Temperament].
The undershot bite is a characteristic of the breed.   Bitches have identical characteristics as males but less pronounced.

TEMPERAMENT-  An ancient fighting dog, the Dogue de Bordeaux is gifted for guarding, which he assumes with vigilance and great courage, but without aggressiveness.   A good companion, very attached to his master and very affectionate.   Calm, balanced with a high stimulus threshold.      The male normally has a dominant character.

HEAD AND SKULL-Voluminous, angular, broad, rather short, trapezoid when viewed from above and in front [trapezoid means a four sided object with two sides parallel.   See the diagram of the head, and, viewed from the front,  it will be noted that the top and bottom surfaces are parallel whilst the two sides are not, being wider at the top than at the bottom].
Cranial Region [Skull]:   In the male, the perimeter [circumference] of the skull measured at the level of its greatest width corresponds roughly to the height at the withers.   In bitches, it may be slightly less.
Its volume and shape are the consequences of the very important development of the temporals [bones of the temple], supra-orbital arches [ over the eye sockets or eyebrows], zygomatic arches [bony ridges forming the lower edges of the eye sockets] and the spacing of the branches of the lower jaw.   The upper region of the skull is slightly convex [arched] from one side to the other.
Fronto-nasal or stop is very pronounced, almost forming a right angle with the muzzle (95 to 100 degrees).
The frontal groove is deep, diminishing towards the posterior end of the head.   The forehead dominates the face, however it is still wider than high.
The head is furrowed with symmetrical wrinkles, each side of the median groove.   These deep ropes of wrinkle are mobile depending on whether the dog is attentive or not.
Facial Region - Muzzle:
Nose:   Broad, well opened nostrils, well pigmented according to the mask.  Upturned nose (snubbed) permissible but not if it is set back towards the face.
Muzzle:   Powerful, broad, thick, but not fleshy below the eyes, rather short, upper profile very slightly concave, with moderately obvious folds.   Its width hardly decreasing towards the tip of the muzzle, when viewed from above it has the general shape of a square.   In relation to the upper region of the skull, the line of the muzzle forms a very obtuse [blunt] angle upwards.   When the head is held horizontally, the tip of the muzzle, truncated, thick and broad at the base, is in front of a vertical tangent to the anterior face of the nose [the end of the muzzle is in front of the forward edge of the nose]   Its perimeter [circumference] is almost two thirds of that of the head.   Its length varies between one third and one quarter of the total length of the head, from the nose to the occipital crest.   The limits stated (maximum one third and minimum one quarter of the total length of the head) are permissible but not sought after, the ideal length of the muzzle being between these two extremes.
Jaws:   Very powerful, broad.  The lower jaw curves upwards.  The chin is well marked and must neither overlap the upper lip exaggeratedly nor be covered by it.
Upper lip:   Thick, moderately pendulous, retractile.  When viewed in profile it shows a rounded lower line.   It covers the lower jaw on the sides.   In front, the edge of the upper lip is in contact with the lower lip, then drops on either side, thus forming a reversed, wide V.
Cheeks:   Prominent, due to the very strong development of the muscles.

EYES-   Oval, set wide apart.   The space between the two inner angles of the eyelids is equal to about twice the length of the eye (eye opening).  Frank expression   The haw must not be visible.  Colour - hazel to dark brown for a dog with a black mask, lighter colour tolerated but not sought after in dogs with either a brown mask or without a mask.

EARS- Relatively small, of a slightly darker colour than the coat.  At its set on, the front of the base of the ear is slightly raised.  They must fall back, but not hang limply, the front edge being close to the cheek when the dog is attentive.   The tip of the ear is slightly rounded; it must not reach beyond the eye.  Set rather high, at the level of the upper line of the skull, thus appearing to accentuate its width even more.

MOUTH- Undershot (the undershot condition being a characteristic of the breed).   The back of the lower incisors is in front of and not in contact with the front face of the upper incisors.
Teeth:   Strong, particularly the canines.   Lower canines set wide apart and slightly curved.  Incisors well aligned, especially in the lower jaw where they form an apparently straight line.

NECK- Very strong, muscular, almost cylindrical.  The skin is supple, ample and loose.  The average circumference almost equals that of the head.   It is separated from the head by a slightly accentuated transversal [crosswise] furrow, slightly curved.   Its upper edge is slightly convex [arched].   The well defined dewlap starts at the level of the throat, forming folds down to the chest, without hanging exaggeratedly.   The neck, very broad at its base, merges smoothly with the shoulders.

FOREQUARTERS- Strong bone structure, legs very muscular.
Shoulders:   Powerful, prominent muscles.  Slant of shoulder-blades medium (about 45 degrees to the horizontal), angle of the scapular-humeral articulation [point of shoulder] a little more than 90 degrees.
Arms [upper arms]:   Very muscular.
Elbows:   In the axis of the body, neither too close to the thoracic wall nor turned out [turned neither in nor out].
Forearms:   Viewed from the front, straight or inclining slightly inwards, thus getting closer to the median plane [centre line], especially in dogs with a very broad chest.   Viewed in profile, vertical.
Metacarpial region [Pasterns]:   Powerful.  Viewed in profile, slightly sloping.  Viewed from the front, sometimes slightly outwards, thus compensating for the slight inclination of the forearm inwards.

BODY -  Topline:  Solid with a broad and muscular back, withers well marked, broad loin, rather short and solid, rump moderately sloping down to the root of the tail.
Chest:  Powerful, long, deep, broad, let down lower than the elbows.  Broad and powerful breast whose lower line (inter-axillae) [between the armpits] is convex towards the bottom.   Ribs well let down and well sprung but not barrel shaped.  The circumference of the chest must be between 25 to 30 cms greater than the height at the withers.
Underline:   Curved, from the deep brisket to the rather tucked up, firm abdomen, being neither pendulous nor whippety.

HINDQUARTERS- Robust legs with strong bone structure; well angulated.  When viewed from behind, the hindquarters are parallel and vertical, thus giving an impression of power, even though the hindquarters are not quite as broad as the forequarters.
Thigh [first or upper]:   Very well developed and thick with visible muscles
Stifle:   In a parallel plane to the median [centre] plane or slightly out.
Second Thigh:   Relatively short, muscled, descending low.
Hock:   Short, sinewy, angle of the hock joint moderately open
Metatarsus [Rear pastern]:   Robust, no dewclaws.

FEET -  Forefeet:   Strong.   Toes tight, nails curved and strong, pads well developed and supple; the Dogue is well up on his toes despite his weight.
Hindfeet:   Slightly longer than the front feet, toes tight.

TAIL- Very thick at the base.  Its tip preferably reaching the hock and not below.  Carried low, it is neither broken nor kinked but supple.  Hanging when the dog is in repose, generally rising by 90 to 120 degrees from that position when the dog is in action, without curving over the back or being curled.

GAIT/MOVEMENT-  Quite supple for a mollossoid [mastiff type].  When walking, the movement is free, supple, close to the ground.  Good drive from the hindquarters, good extension of the forelegs, especially when trotting, which is the preferred gait.   When the trot quickens, the head tends to drop, the topline inclines towards the front, and the front feet get closer to the median plane [move closer together] while striding out with a long reaching movement of the front legs.   Short gallop with vertical movement rather important.  Capable of great speed over short distances by bolting along close to the ground.

COLOUR -   Self-coloured, in all shades of fawn, from mahogany to Isabella [lightish fawn].   A good pigmentation is desirable.
Limited white patches are permissible on the chest and the extremities of the limbs.
Mask:
1. Black mask:  The mask is often only slightly spread out and must not invade the cranial [skull] region.  There may be slight black shading on the skull, ears, neck and top of body.   The nose is then black.
2. Brown mask:  (Used to be called red or bistre [darkened or swarthy]).   The nose is then brown; the eyerims are also brown.
3. No mask:  The coat is fawn; the skin appears red (also formerly called "red mask").   The nose is then reddish or pink.

FAULTS- Any departure from the foregoing points should be considered a fault and the seriousness with which the fault should be regarded should be in exact proportion to its degree.
Serious Faults:
· Hyper-aggressive, timid
· Head short and round with protruding eyes
· Hypertypical [excessively] bulldoggy; flat skull, muzzle measuring less  than a quarter of the total length of the head
· Important lateral deviation of the lower jaw [wry mouth]
· Incisors constantly visible when the mouth is closed
· Arched [roach] back
· Fused but not deviated vertebrae of the tail
· Forefeet turning inwards (even slightly)
· Forefeet turning outwards too much
· Flat thighs
· Angle of hock too open (straight angulation)
· Angle of the hock too closed, dog standing under himself behind
· Cow hocks or barrel hocks
· Stilted movement or serious rolling of the rear
· Excessive shortness of breath, rasping
· White on tip of tail or on the front part of the forelegs, above the carpus  [wrist] and the tarsus [hock joint]

Disqualifying Faults:
· Long, narrow head with insufficiently pronounced stop, with a muzzle measuring more than a third of the total
length of the head (lack of type in head)
· Muzzle parallel to the top of the skull [parallel planes], or downfaced,  Roman nosed
· Twisted jaw
· Mouth not undershot
· Canines constantly visible when the mouth is closed
· Tongue constantly hanging out when the mouth is closed
· Tail knotted and laterally deviated or twisted (screw tail, kink tail)
· Atrophied tail
· Fiddle front with splay feet
· Angle of the hock open towards the rear (tarsal deviated towards the  front)  [reverse angle of hock]
· White on the head or body, any other colour of the coat than fawn
· Identifiable disabling defect