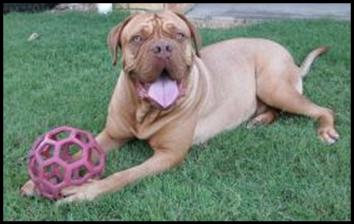 "Reggie"
_
Canine Epilepsy is a hideous disease that affects thousands of dogs of all breeds.

There have been cases of diagnosed Epilepsy in the Dogue de Bordeaux in many different countries including Australia.

Any Dogue diagnosed with Epilepsy should be removed from breeding programs.

The problem is that some cases of Epilepsy do not show any symptoms until the dog is 3-4 years old and by that time has usually been bred with and may have already passed on the disease to their offspring.

Offspring of affected dogs should also not be bred from.

There is no health test for Epilepsy.

Epilepsy simply refers to repeated seizures. Seizures may occur as a one time event in an animal from a variety of causes, but only if the seizures repeat again and again over a period of time do we call it epilepsy. Seizures are a sign of brain disease the same way a cough is a sign of lung disease. Saying an animal has epilepsy is like saying it has a chronic cough; it is a sign of a problem which isn't going away.

Anything which damages the brain in the right area can cause epilepsy.

If we can identify the cause of the seizures, say a brain tumor or a stroke, then we say the pet has symptomatic (or secondary) epilepsy. That is, the seizures are a symptom of a disease process we've been able to identify.

If we've looked and can't find the cause, then we call it idiopathic (or primary) epilepsy.  The term idiopathic simply means that we don't know the cause. It may be that the cause has escaped our attention; for example, a stroke that is too small to detect with routine brain scans or damage that occurred during whelping.

Many of the idiopathic epileptics have inherited epilepsy: epilepsy caused by a mutation in a specific gene which they inherited from their parents.

Dogs with idiopathic epilepsy frequently begin seizing at between one and three years of age, and certain breeds are predisposed to develop epilepsy.  A few breeds have proven hereditary epilepsy, while in most it is just a strong suspicion.

Epilepsy is NOT a death sentence.  Many dogs with epilepsy if diagnosed correctly and given accurate treatment usually with suitable drug control of the seizures, diet, etc—can live long and happy lives.  But will always require medication to control their seizures and constant monitoring by their owners.

This disease makes you feel completely helpless, devastated and alone.

There are support groups out here that can help.

Here are some links to some Epilepsy websites