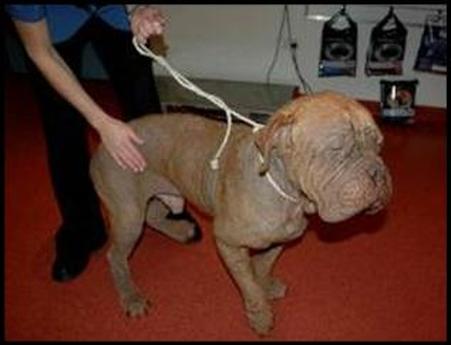 "Henry" had severe demodectic mange.
_
Often called Demodex, is a skin disease caused by parasitic mites called Demodectic Mites.  Demodectic Mites live in your dog’s skin all the time. They are year round inhabitants that do no damage unless or until your dog’s immune system is weakened or weak. When the immune system of your dog is strong and developed, it keeps the mite numbers low, preventing the small number of them in its body from doing any harm. When the immune system is weak, or weakened, the mites do their damage.  You won’t even be aware of these mites being in your dogs body, until you see some symptoms.  These symptoms are sometimes mistaken for a staph infection, a skin scraping at your vet may confirm the diagnosis.

The symptoms of Demodectic Mange are usually easy to spot.

It shows itself in small bald patches on your Dogue, usually found near the base of the ear opening, above the eyes, the belly, paws, chest and sometimes elsewhere.  The localized form of Demodex shows itself as one or a few bald spots in the "usual places" mentioned previously.  The generalized form of Demodex shows itself in a greater number of bald spots, as it worsens and spreads, and is often accompanied by other infections of the skin.

There are several theories as to the causes of Demodectic Mange, and each is probably valid to one degree or another.

In terms of the Localized form, Demodex usually shows itself in between the ages of 3 and 12 months.  Given the fact that Localized Demodex occurs most often at this age, it is often thought that the reason behind it is the still developing immune system of a puppy.

However, it is also quite common for Demodectic Mange to show itself in a dog that has recently moved from breeder to home, or from one home to another.  Because of this, it is also theorized that stress may be a cause of Demodectic Mange as well.  Another factor in Demodex are other illnesses or injury, if a dog is already battling an illness or injury, the lowered immune system can allow the mange mites to increase.

In the Generalized form, Demodex may be the result of a weak immune system, genetically passed along from generation to generation and is evident in adult dogs.  It appears that some bloodlines are more susceptible to skin problems than others.

As long as your Dogue does not have a genetic deficiency of its immune system, treatment of Demodectic Mange is usually successful.

If there is a genetic deficiency of the immune system, Demodectic Mange can be an on-going lifelong battle that, if kept under control, can be manageable to the point where it does not become life threatening.