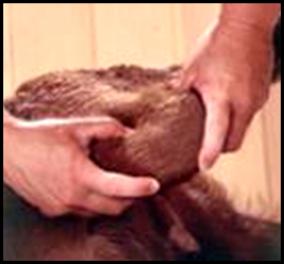 _ Limping in the rear end does not always indicate hip dysplasia.  The anterior cruciate ligament is an important structure in the stifle (knee) joint of the dog because it helps stabilise and strengthen the knee during movement.   When the ligament ruptures (tears), it causes instability in the knee which in turn causes inflammation and damage to the joint.

The rupture can occur after a period of gradual degenerative changes in the ligament or by a traumatic accident.  Dogues have been known to rupture their cruciate ligament when they go from lying down, relaxing or sleeping, to suddenly jumping up and running around the yard or playing.  Their muscles and ligaments have no time to ‘warm up’, so like an athlete, they injure themselves.  Slipping over is also another common cause of  tearing the cruciate ligament , be wary of your dog on vinyl floors, polished timber floors and other smooth potentially slippery surfaces.

Often dogs with straighter rear angulation are more susceptible to cruciate injuries. This is why it is important you are able to recognise good and poor angulation in the parents of your puppy.

After the vet’s diagnosis, treatment often begins with anti-inflammatory medication, total rest and confinement to a crate, only allowed out of the crate on a leash.  Rehabilitation may include some manipulation from a dog chiropractor.

However, surgery is often required to repair the damage.  The surgically repaired knee may never be as strong as it was  before the rupture, and it is not uncommon for the cruciate ligament in the other knee to rupture later.

Surgery on one leg to correct cruciate ligament damage can cost more than $4000!